In anticipation of Memorial Day, today’s post is about my experience bicycling Culp’s Hill in Gettysburg National Military Park. For me, battlefield bicycling ignites a “new burst of freedom” (a play on President Lincoln’s words) that draws inspiration from the sacrifice of our veterans, living and dead. First, though, an admission. I struggle to find words that explain my personal opinion:

Bicycling historians experience in our bodies the freedom won on the battlefield. In other words, the bodily experience of bicycling a U.S. Civil War battlefield is a celebration of personal and civic freedom.

That’s about as succinct as I can say it, but the words sound so — what word should I use? — patriotic? profound? hollow? uppity? fake? naive? obvious? true? Nevertheless, the words capture how I feel.

In this post, perhaps the best I can do is to run with those two sentences; add some photos; and mix-in a few paragraphs laced with words that connote sweat, grime, gusty breezes, and stinging heat. … and gratitude! Gratitude for the freedom to ride where I choose, how I choose, and with whom I choose.

On Memorial Day, we remember and honor our military men and women who have died in service of our country. I remember them every time I bicycle Gettysburg National Military Park. And for me, there is no greater example of a liberating ride than pedaling hard up Culp’s Hill and then flying down so fast that it’s really wise to tap your brakes at least a little. The wind is so strong against my ears that I can only hear its roar. The wind gives extra meaning to the phrase, “new burst of freedom.”

The above photos hint at the the beauty of Culp’s Hill, but it may not be obvious what an awesome ride it offers to bicyclists. Frankly, I cannot give up this fast, thrilling ride for the idea of stopping to snap photos. And even if I did, you would really need a video recording to understand the thrill.

Pedaling up the hill along Slocum Avenue is another matter entirely. Even though it is a tree-lined road, in the summer the pavement is dreadfully hot. I will jump at any excuse to sit on a rock and enjoy a juicy apple. I don’t mind mixing sweaty palms with sticky apple juices, because I have a warm but wet washcloth in my panniers. And I am 100-percent sure that I am fortunate not to have been a soldier fighting on this steep hill.

A New Burst of Freedom on a Bicycle

… that we here highly resolve that these dead shall not have died in vain — that this nation, under God, shall have a new birth of freedom — and that government of the people, by the people, for the people, shall not perish from the earth.

In one sense, of course, my words could be received as a trivialization of the meaning of the Battle of Gettysburg. That is not my intent. I am only suggesting that sometimes it’s the little things in life that are the biggest expression of virtue and gratitude. President Lincoln’s 272-word address to the nation might just be the best example of oratory simplicity. Ever. Me on the other hand, all I can do is bicycle. And experience a new burst of freedom.

A Little About Culp’s Hill

Where is Culp’s Hill?

Culp’s Hill is less than one mile southeast of downtown Gettysburg. According to the United States Geological Survey, it stands at 629 feet MSL (Mean Sea Level). By contrast, nearby Cemetery Hill is 616 feet MSL. On July 2-3, 1863, the Union line extended from Culp’s Hill (its right flank), west and around Cemetery Hill, and then south along Cemetery Ridge to Little Round Top (649 feet MSL), which is about two miles from Culp’s Hill. 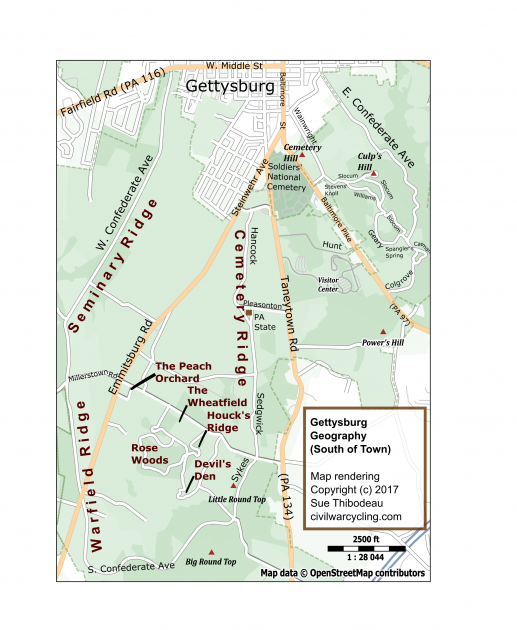 The bicyclist experiences these modest hills as short and steep ascents followed by great downhill bursts. The ride from the south end of Slocum Avenue (at Spangler’s Spring) to the summit of Culp’s Hill is a 0.8 miles climb with very little relief unless one takes a break to look at the many regimental monuments that line the park roadway. The ride down Slocum Avenue to Stevens’ Knoll (at the intersection of Slocum and Wainwright Avenues) is a quick 0.2 miles. I wish this “new burst of freedom” were longer, because it’s over in a jiffy.

Slocum Avenue is named after Union Maj. Gen. Henry W. Slocum (1827–94), commander of the 12th Corps, Army of the Potomac. The park avenue marks the approximate position of the Union battle line. This was the Union right flank on July 2-3, 1863, when Confederates attacked from the north and west, roughly from positions marked by modern-day E. Confederate Avenue.

The fighting on Culp’s Hill was intense. The oldest Union general at Gettysburg, Brig. Gen. George S. Greene (1801–99), ordered his brigade to create earthen breastworks to hold the Confederates in check. The sixty-two-year-old former civil engineering instructor from West Point and his men in Slocum’s 12th Corps held the high ground for the duration of the Battle of Gettysburg. In 1907, a monument honoring Greene (by sculptor R. Hinton Perry) was dedicated at the top of Culp’s Hill, not far from the Observation Tower.

Why Does It Matter?

Lincoln addressed a crowd of 15,000-20,000 people at the dedication ceremony for Soldiers’ National Cemetery in Gettysburg. Although the Gettysburg Address is not directly associated with Memorial Day, his words continue to explain for generations of Americans why it matters:

Four score and seven years ago our fathers brought forth on this continent, a new nation, conceived in Liberty, and dedicated to the proposition that all men are created equal.

Now we are engaged in a great civil war, testing whether that nation, or any nation so conceived and so dedicated, can long endure. We are met on a great battle-field of that war. We have come to dedicate a portion of that field, as a final resting place for those who here gave their lives that that nation might live. It is altogether fitting and proper that we should do this.

But, in a larger sense, we can not dedicate — we can not consecrate — we can not hallow — this ground. The brave men, living and dead — who struggled here, have consecrated it far above our poor power to add or detract. The world will little note, nor long remember what we say here, but it can never forget what they did here. It is for us the living, rather, to be dedicated here to the unfinished work which they who fought here have thus far so nobly advanced. It is rather for us to be here dedicated to the great task remaining before us—that from these honored dead we take increased devotion to that cause for which they gave the last full measure of devotion — that we here highly resolve that these dead shall not have died in vain — that this nation, under God, shall have a new birth of freedom — and that government of the people, by the people, for the people, shall not perish from the earth.