A Child’s Perspective of Jennie Wade

The Jennie Wade Story was not part of my childhood narrative. But I loved Gettysburg, because I loved camping, hiking, and touring museums. And my family came to Gettysburg frequently.

As a child, the Jennie Wade Story was little more than an opportunity for me to visit a fun souvenir shop and buy some junkie trinkets or root-beer flavored stick candy. It was a chance to pop into an air-conditioned room during a hot summer family vacation walking all over town.

We didn’t have the money to tour the Wade-McClellan House, or at least the cost seemed too high for a large family. I don’t recall feeling deprived, since for me the greatest part of Gettysburg was the Electric Map in the old visitor’s center on Taneytown Road.

The Wade-McClellan House is nestled in a busy commercial area, very close to what was once a Holiday Inn and across from a Shell mini-mart. There are dozens of little shops that sell T-shirts, flags, little brass cannons, plastic swords, cap guns, felt hats, books, posters, minié balls – you name it!

If one were to look superficially at Gettysburg, it would be easy to think that boyish commercialism had overtaken the town and its history. Rumors that the house was haunted only added to my impression that the Jennie Wade Story was a historical cartoon.

What about what happened here?

As a child, I did not know that the Wade-McClellan House borders Cemetery Hill, upon whose soil many thousands of young men died or lost arms and legs. There are a slew of monuments on that hill.

I did not understand how baking bread and caring for children – no matter how honorable and necessary – could be considered a service to my country. I wanted to go to college and win the Nobel Prize. Oh my.

A Teenager’s Perspective of Jennie Wade

As a teenager, I remember dismissing the Jennie Wade Story as a feminist trope. I was suspicious of what seemed like efforts to insert women into historical narratives for political purposes.

I was wrong about feminism.

As a teenager, I naively thought that women did not need a second-wave of feminist activism in the 1970s. The Equal Rights Amendment was not necessary, because the social “battle” was won, or so I thought. I was wrong.

Many people thought that the ERA could thrust women into mandatory military service. Vietnam was raging, and I did not want women to be drafted. Let’s not make women so “equal” that we get draft cards, too, I thought. (I had a friend named Ai whose entire body was scarred by burns from the war. It was upfront and personal, for me.)

I was wrong about gender roles.

As a teenager, I wondered whether we really needed to find and celebrate stories about women baking bread for soldiers, when women could do so much more than that? Today, I cringe when I think about my teenage perspective on Jennie Wade.

My opinions contradicted each other and I didn’t know it. I wasn’t impressed by Jennie’s bravery while baking bread, but I would not have wanted her to don the outfit of a soldier and fight, even if she could sustain the deception, as many women did.

Sadly, I did not understand how unfair it was for me to dismiss the contributions of 19th century women simply because their work and leadership was tightly bound to traditional gender roles. And I was not capable of considering what it would be like to lose a sister (as did Georgia) or a daughter (as did Mary) to such violence.

I was wrong about patriotism.

And worse, I failed to see that women like Jennie, Georgia, and Mary Wade were patriots who deserved my respect and thanks. I did not understand that acts of compassion are no less valiant and necessary than hard fighting to preserve Liberty and Justice for All. As a teenager, I didn’t see a point to bicycling through history, so I never gave it a thought.

An Adult’s Perspective of Jennie Wade

You are probably not surprised that my perspective, as an adult, is very different. And yet, I will admit that for most of my adult life, I remained disinterested in the Jennie Wade Story. There were just too many more important historical events that I knew nothing about.

That changed in June 2015, while bicycling Gettysburg National Military Park.

Maybe it’s because my recent retirement from the corporate world gave me the “mental room” to reflect deeply on the role of women in 21st century American society.

Or perhaps it’s because my daughter was a young adult who is stepping into the corporate world and building a life.

Maybe it’s because I know a little more about the human heart and the shortness of our lives.

Certainly, my growing concern for our country had something to do with it, because…

Around the same time as my 2015 Gettysburg bicycling trip, one of my nieces interviewed several World War II veterans who gathered in Washington D.C., as part of Honor Flight. Almost all of them talked about the importance of Freedom and expressed sadness that our nation is slowly losing its grip on Liberty.

Freedom and Liberty are big themes at Gettysburg. And for me, bicycling is the perfect physical expression of personal freedom, especially when I am bicycling through a U.S. military park.

For as long as I can remember, I have felt deeply connected to Soldiers National Cemetery. 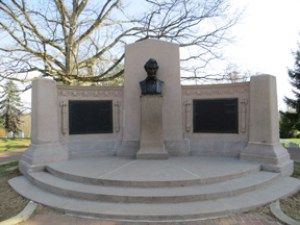 The pull to visit the Lincoln Address Memorial is so strong that I have visited it many dozens of times – whenever I pass through Gettysburg on my way to Maryland. My husband and I stood hand-in-hand before the memorial while vacationing on our honeymoon.

Lincoln addressed the country and explained the reason for the great sacrifice of Gettysburg: that government of the people, by the people for the people, shall not perish from the earth.

It’s time to go deeper. Our story continues… from the perspective of an adult woman living over 150 years later. Please continue to the next page.